When it comes to multi-level marketing (MLM) and pyramid schemes, there is a lot of confusion about what the two are actually.

Many people use the terms interchangeably, but there are both differences and similarities between the two.

The main difference between a pyramid scheme and multi-level marketing is what is being sold. With pyramid schemes, the people at the top make money by recruiting new members, who then have to recruit more people in order to make money. With MLM schemes, people make money by selling products or services. 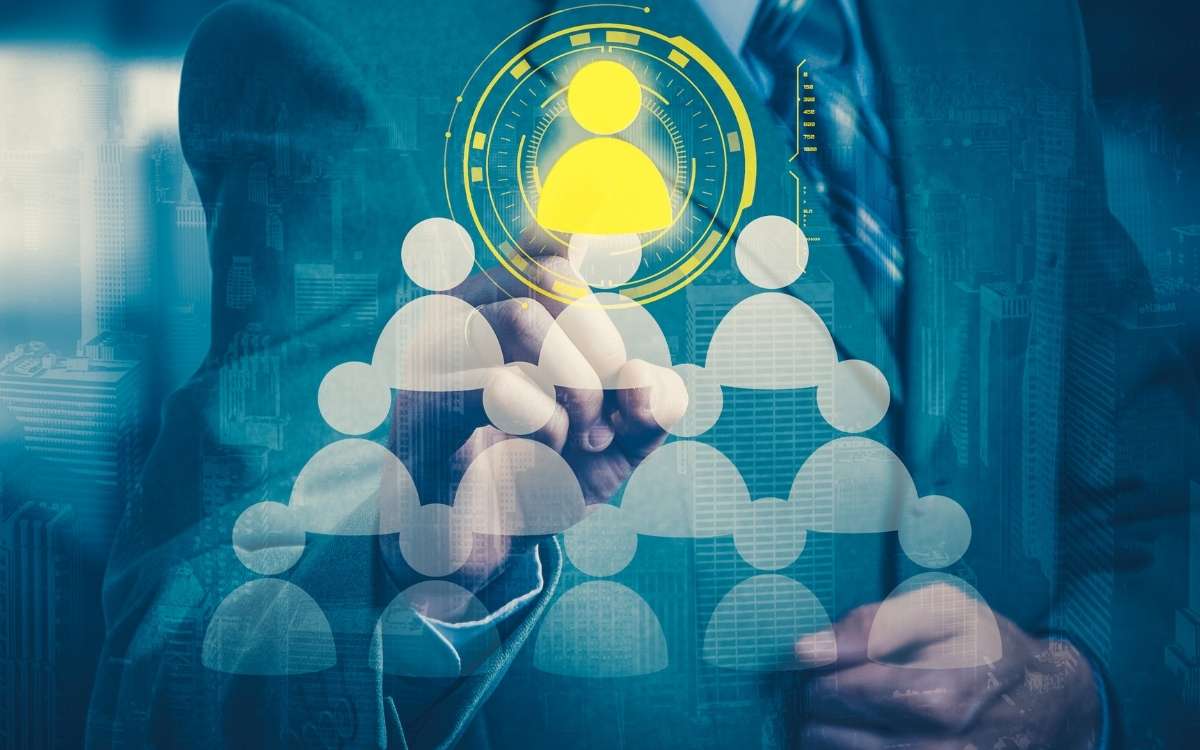 They can both be harmful techniques that can jeopardize the financial stability of women working to improve their financial future for themselves and their families.

In this blog post, we will discuss the key differences between a multilevel marketing company and a pyramid scheme so that you can be better informed about which is which.

What Are Pyramid Schemes? 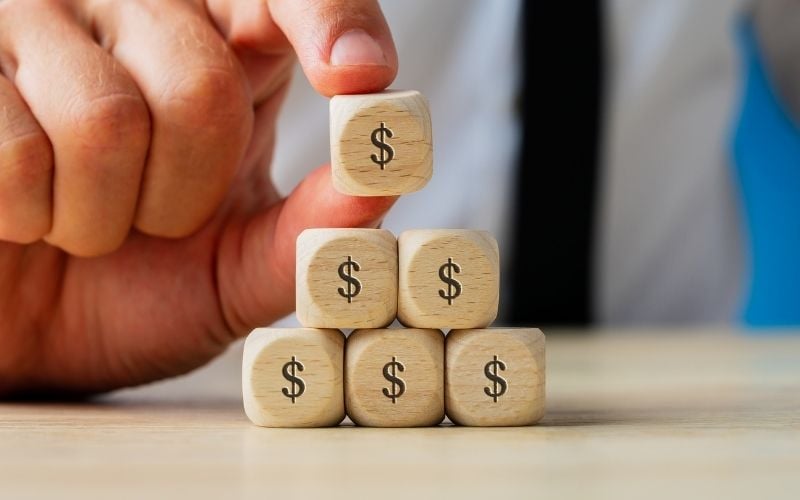 A pyramid scheme is a type of fraud that involves promising participants payment or services, primarily for enrolling other people into the scheme.

The reason that people at the top of the pyramid make money is that they receive a commission for every person that they recruit.

The problem with this scheme is that it is not sustainable. Eventually, there will be no new people to recruit and the whole thing will collapse.

This can leave a lot of people out of pocket and in debt.

Pyramid schemes are illegal in the United States and many other countries. They are also known by other names, such as Ponzi schemes or chain referral schemes.

The first pyramid scheme was created in the early 1920s by Charles Ponzi. He promised investors that he could provide a 50% return on their investment in just 45 days.

This continued until he couldn’t find enough new investors to keep up with the demand, and the whole thing collapsed.

What Is Multi-Level Marketing? 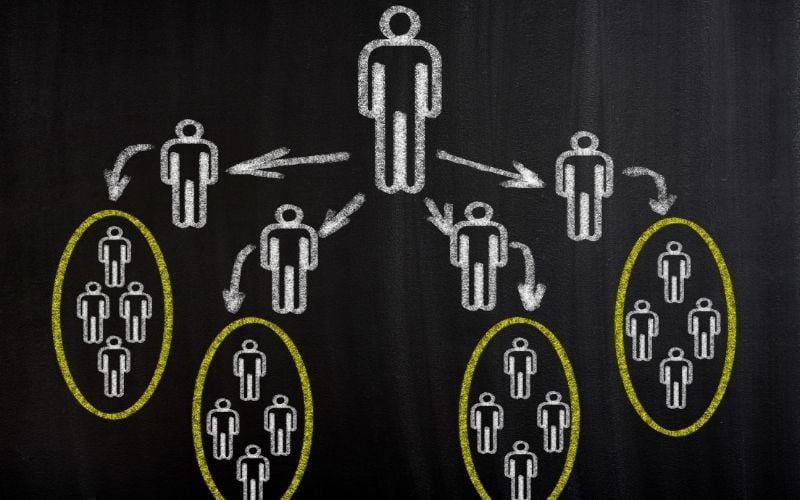 Multi-Level Marketing (MLM) is a type of direct selling in which people sell products or services to customers.

They earn commission on their sales as well as the sales of the people they recruit to join the company’s sales force.

MLM companies often use pyramid-like structures to pay their salespeople. However, not all multilevel marketing companies are pyramid schemes.

The difference is that with MLM structures, the products or services being sold must have provable value.

However, many believe that MLM companies are just pyramid schemes in disguise. This is because the focus is often on recruitment rather than selling the products or services.

Certain countries have even banned MLM companies because of this.

In many cases, people make more money from recruiting new members than they do from selling products or services.

This can make it very difficult for people to make a profit from MLM companies.

Differences Between MLM and Pyramid Schemes 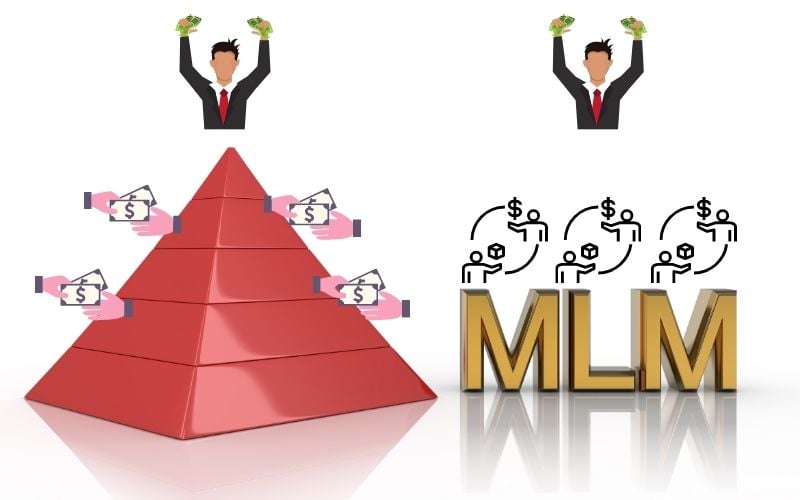 The key difference between multilevel marketing and a pyramid scheme is what is being sold.

With pyramid schemes, the people at the top make money by recruiting new members, who then have to recruit more people in order to make money.

People who are higher up in the company may make more money from a combination of commissions and recruitment.

However, the focus should be on selling the products or services in order to make a profit. If the focus is on recruitment, then it is likely that the company is operating as a pyramid scheme.

This is because MLM companies are selling products or services that have value, whereas pyramid schemes are not.

Pyramid schemes are also much more likely to collapse than MLM companies, as they are not sustainable in the long term.

This can leave people who have invested their time and money into the scheme out of pocket and in debt.

Some MLM Companies that Have Been Accused of Being Pyramid Schemes

There are many MLM companies that have been accused of being pyramid schemes.

Some of these companies include:

It’s important to remember that not all MLM companies are pyramid schemes. However, there are some that have been accused of being such.

It’s important to do your research before investing your time and money into a lawful MLM program.

What Was the Biggest Pyramid Scheme Ever? 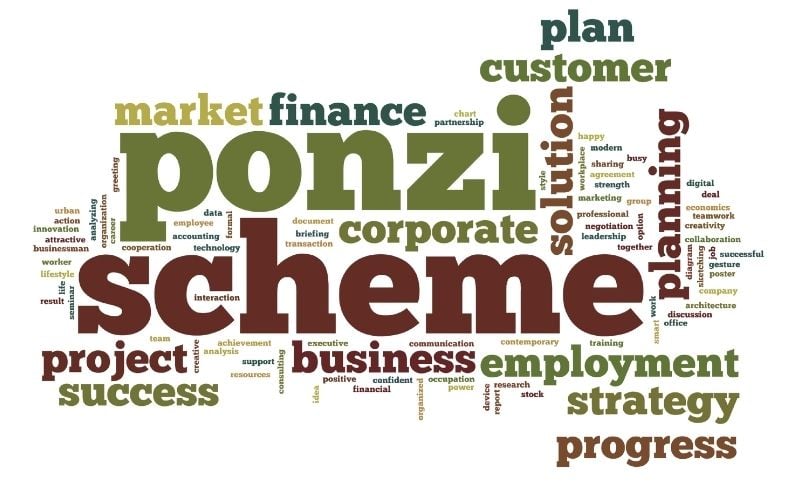 The largest pyramid scheme involved Bernard Lawrence Madoff. He was an American financier who constructed a fraudulent Ponzi scheme worth approximately $65 billion dollars.

His illegal pyramid scheme is thought to be the biggest in history.

Madoff was arrested in 2008 and sentenced to 150 years in prison for his fraudulent schemes. Many of his victims lost their life savings, and some were left destitute.

The Madoff scandal brought attention to the fact that pyramid schemes can cause immense financial damage to those who invest in them.

However, not every pyramid scheme is at this scale. Many people are manipulated by smaller, more intimate schemes that can still have a huge financial impact.

How Do You Stop MLM Friends? 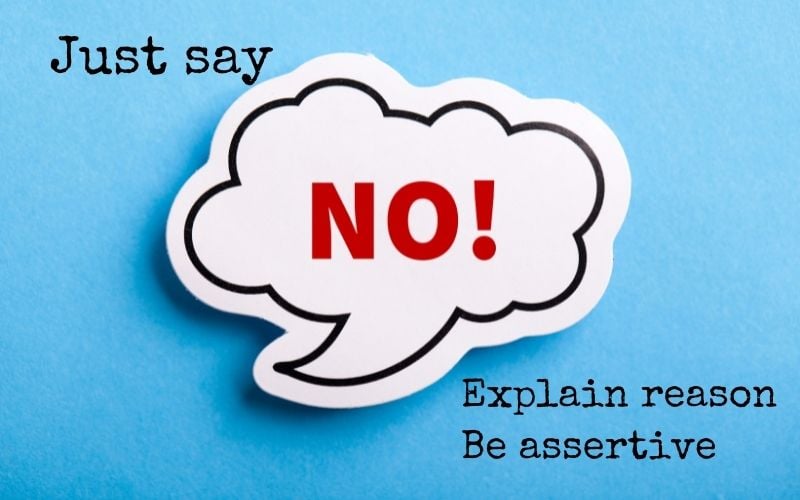 It’s common for people to be approached by friends or family members who are new distributors or actively recruiting people.

If you’re not interested, it can be difficult to know how to say no without offending them.

Here are some tips for how to stop MLM friends:

You can simply say that you’re not interested and leave it at that. This can be a good choice if you don’t want to have a bunch of back-and-forth persuasive arguments.

A big part of the MLM strategy is to use high-pressure sales tactics, so a solid “no” will be enough to stop most distributors.

Let your friend know you’re not interested in extravagant promises or knowing all the details in a kind yet firm way.

If you want to explain your reasons for not being interested, you can do so in a polite and respectful way.

You could say that you don’t think it’s something you would be good at or that you’re not interested in the products or services being sold.

This is a good approach if you don’t want to offend the person but still want to explain your reasons.

You can let your friend know why you’re not interested in the business model in a kind way.

On the other hand, it’s important to be assertive when saying no. This means that you should use clear and concise language.

For example, you could say “I’m not interested in joining your MLM company. Please don’t ask me again.”

Perhaps it’s a good time to let your friends or family members know that you’re worried about their involvement in the company if you think something is awry.

Make sure to be respectful and understanding, as they may be going through a tough time.

How To Protect Yourself From Pyramid Schemes

When it comes to pyramid schemes and MLM, knowledge is power. The more you know about the difference between the two, the less likely you are to be scammed by either one. 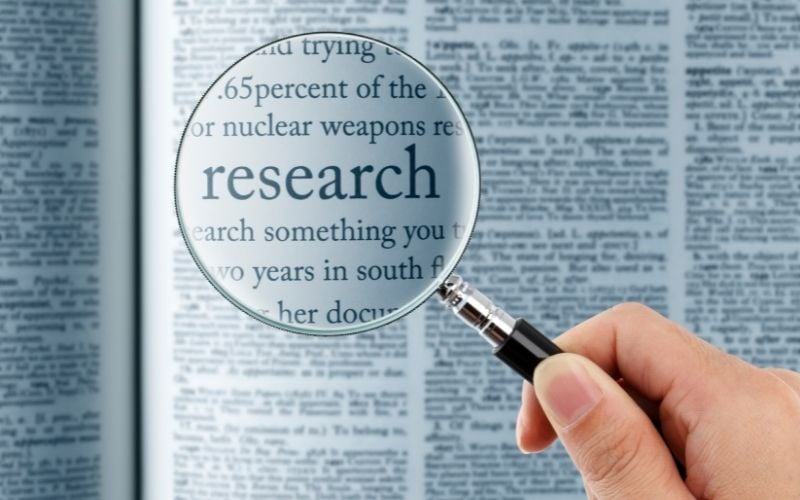 If someone approaches you about an opportunity that sounds too good to be true, do your research before getting involved.

There are many reputable MLMs out there, but there are also many pyramid schemes posing as MLMs. Look into the company’s products to see what kind of sales are being generated.

Look for any warning signs online, and confirm that the company is making money while retaining a high customer satisfaction rate.

If it is a legitimate MLM, it will be structured such that commission is a secondary income to the products sold.

Be sure to check out the company with the Better Business Bureau and do a Google search to see if there have been any complaints about the company.

A legitimate MLM business will have a good reputation with the BBB, while a pyramid scheme will not.

You can also ask people you know if they have heard of the company and what their experience has been.

Look up how long the business has been in operation. You can also check for complaints through the locate state attorney general’s office and the Federal Trade Commission. 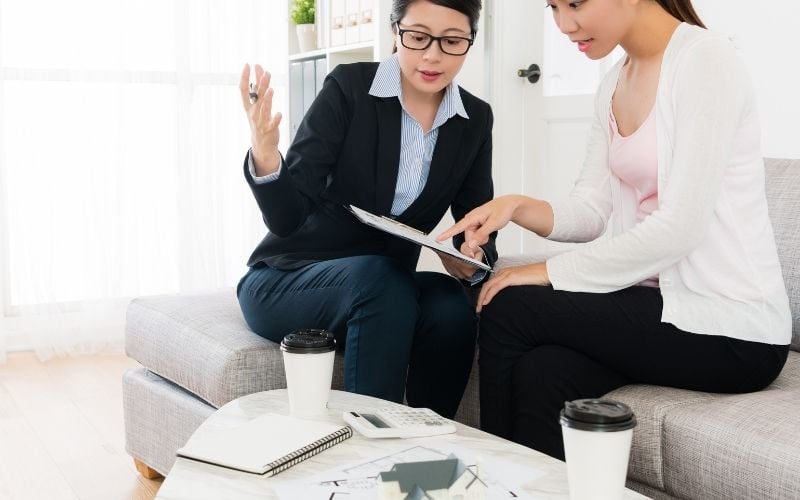 If you’re considering joining an MLM, make sure to ask lots of questions.

You should be able to get a clear idea of how the company works and how you will be compensated for your efforts.

If you’re not given straight answers or if you’re pressured to sign up without having all of your questions answered, that’s a red flag.

You should never have to pay to join an MLM company. If you’re asked to pay, that’s a sign that it’s probably a pyramid scheme.

You should also be wary of companies that require you to purchase a certain amount of product each month.

If you do decide to join an MLM company, be sure to keep your money safe. Don’t invest more than you can afford to lose and be sure to get everything in writing.

Be wary of any company that asks you to open a bank account in their name or sign over your life savings. If it sounds too good to be true, it probably is.

When you’re looking into an MLM, be sure to understand the compensation plan. This is how you will make money with the company.

Make sure you understand how much you will need to sell in order to make a profit and how long it will take you to reach different levels within the company.

Is there enough consumer demand or sales generated to justify the pay rate?

Does the company’s sales literature involve selling products or earning money based solely on recruitment for fast profits?

These are all warning signs that the company may be a pyramid scheme.

Take Time On the Contract 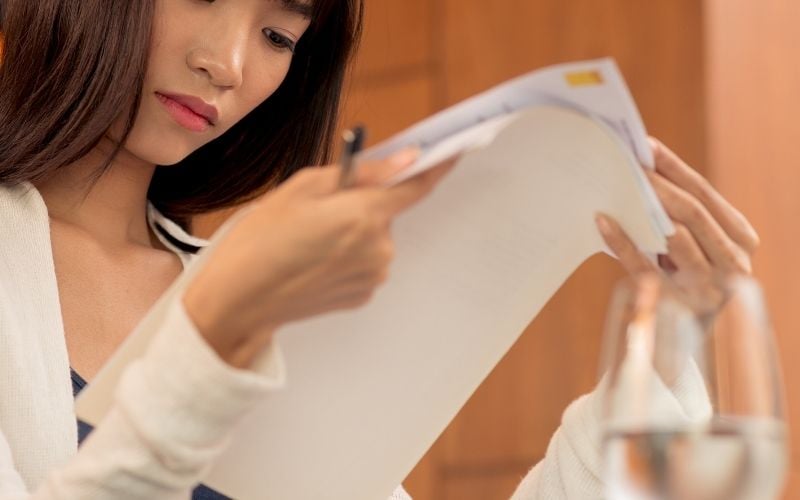 If you do decide to join an MLM, take your time reading over the contract. You should never sign anything without fully understanding it.

If there is something in the contract that you don’t understand, be sure to ask questions or have a lawyer look it over before you sign.

Always take a pause before making any decisions and, if you’re ever in doubt, err on the side of caution.

Take the paperwork home and look it over with a trusted friend or family member before making any decisions.

The difference between multi-level marketing and a pyramid scheme can be confusing, but it’s important to know the difference before getting involved with either one.

Be sure to do your research and ask lots of questions before joining any type of opportunity.

In general, we advise against both business models. Both are known to target low-income earners, stay-at-home mothers, the unemployed, and people with chronic health conditions.

They also tend to be very recruitment-focused rather than product-focused, regardless of their structure. It’s common to lose money through direct sales in both of these models.

If you’re looking for a way to make money from home, we suggest finding a legitimate business opportunity such as a job or starting your own business.

These are much more sustainable and will likely be more profitable in the long run.

Do you have any questions or comments? Please feel free to leave them below! 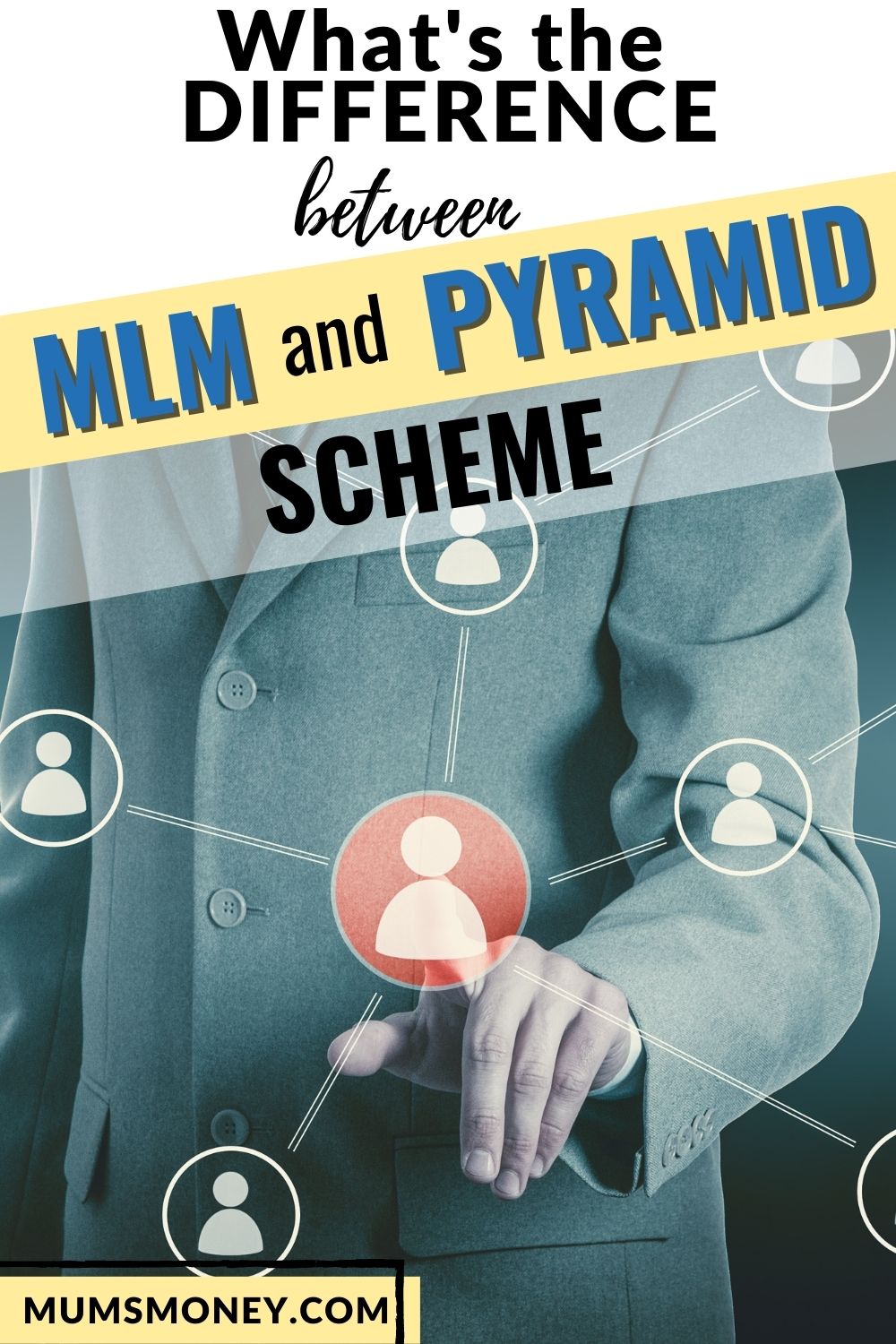 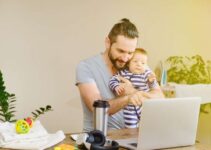 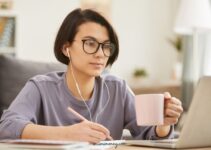 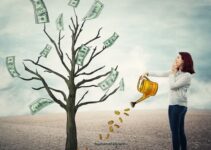