CDs were a fantastic development in the music industry. Overtaking tapes and records using lasers that aimed to avoid skipping – they sounded like a dream!

Tech is hardly perfect though and eventually, CDs became a thing of the past. With the rise of sharing platforms like Napster and Limewire – artists began to panic about their financial future.

Then, geniuses at Apple, Spotify, YouTube, Amazon and others decided to advance the game further with new music services!

This has made the CD obsolete in the modern world and now we have hundreds of them lying about! So, what do we do with them?

This article will show you some great ideas of what you can do with them, with hopefully some things you’d never thought of before! 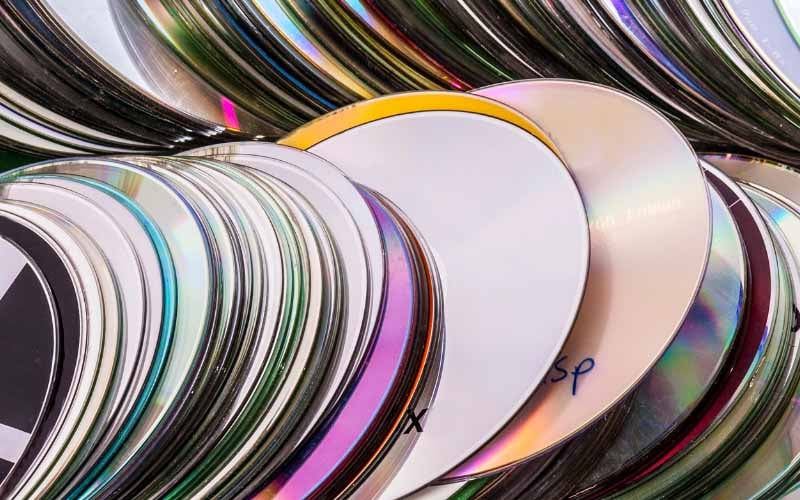 This has got to be your first choice before you consider anything else. Why would you get rid of your old CDs and NOT make money from them? CDs were expensive when they were brand new!

Some shops around can allow you to make some money (albeit, it’s not always a lot) from your old CDs, among other things. You can also find online websites that allow you to value your CDs before you send your property to them.

They will then send you a prepaid postage envelope which will allow you to send your old CDs safely to them and then they will pay you via transfer, PayPal or their own store credit.

Many places will offer you more store credit against real money, and it’s easy to understand why – they want your business!

You could also utilise the Facebook marketplace to sell your CDs. What a lot of people do is take photos of all of their available products with a bulk purchase price and then an individual price which is slightly higher.

This will entice a buyer to take the lot as it is more financially viable.

Similarly, you can use sites like Gumtree or eBay. Be aware though that you might need to pay out for posting and packaging and it could become a useless endeavour depending on how much you’re asking for.

Got a lot of stuff to sell with your CDs? Consider signing up for a car boot sale! This will give you the advantage to sell all of your old junk including the CDs and make a nice payday from it.

Again though, it’s important to remember that car boot sales will usually ask for a fee up front to use their site. It might be a pub car park or a farmer’s field – either way, it’s typically around £20-50 per day but it can be more.

A very environmentally friendly and easy thing to do with your old CDs is to donate them if you’re not using them.

That old saying “one man’s junk is another man’s treasure” is very poignant when it comes to this. There are many donation services available online that will send you a prepaid envelope and allow you to donate your CDs.

Other than this, you can once again utilise the Facebook marketplace or eBay and claim them “free to a good home” or use FreeCycle.

Some local councils will have donation areas set up where you can take your old stuff too, simply check your councils webpage or social media sites.

Another thing you can do is visit a charity shop. Not only will you be donating your CDs in a green way and freeing up some space in your house – but you’ll also be giving the charity an opportunity to make some money for a great cause.

Additionally, you could donate your CDs to a local pub or social club. Many of these places still use CDs in their Jukebox and all CDs will be welcome.

You can also check on sites that offer “wanted” items. In essence, they’re looking for items and you can help them out by getting into contact and helping them out.

Hospitals often ask for donations of entertainment, along with other things, for patients who have to spend a lot of time there. Consider asking the reception if they need any CDs.

The same applies to libraries. Libraries of course have books, but they also have CDs, tapes and DVDs along with some video games. They’re always hoping for generous donations which can give other people happiness.

If you’re hoping to keep your stuff close, try asking family and friends if they would be happy for your CDs at their place. Maybe they need CDs for their car or business!

Whichever method of donation you choose, it’s a fantastic idea to go with and you’ll be helping out in a load of different ways.

This is a really obscure thing to do but there are those that can do it effectively. Some modern artists, particularly University students – use household items to create fantastic works of art. In fact, talented sculptors can make CDs into new items like bird baths or tables.

Look online for people that might be hoping for items to make art, or try it yourself! There’s a lot of ideas out there on the internet that can help your creativity flow.

We’ve seen the rise of people building their own bars in their sheds, garages etc. One facet of a good homemade bar is music – we all love music!

So, instead of getting rid of your old CDs entirely – consider simply moving them and repurposing them in another area of the property. You might be amazed at their new uses!

Old CDs can cause clutter but you don’t need to simply bin them and add to the landfill problem. Try some of these ideas and make your CDs loved once again!